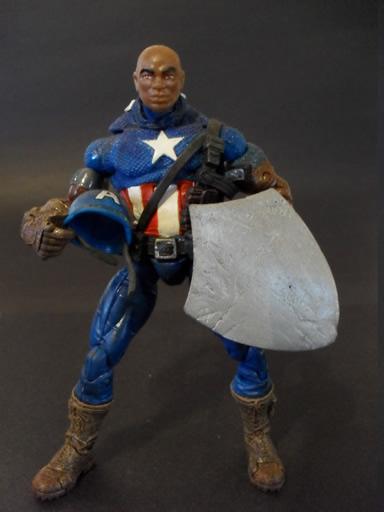 This was a simple custom,( head pop and added some military gear,
painted the arm so he would be bare arm…. to jazz him up abit) but it
meant a lot to me because it is one of my favorite characters. And
basically he is the reason I started down this path. When I was young I
was crazy about super heroes as most of us were, but there were none
that looked like me. So after years of botched paint jobs and studying
numerous site here we go.. I hope to post many more figure/// Your
input is always welcome!!

Project: Rebirth
began as a collaboration between US, British and German eugenicists led
by Dr. “Josef Reinstein” (real name Dr. Wilfred Nagel), and Dr. Koch.
When World War II began, Koch took over the German program and Josef
Reinstein took over the American program from the deceased Dr. “JosePH
Reinstein” (real name Dr. Abraham Erskine).
Each was attempting to
re-create a super soldier program which had turned Steve Rogers into
Captain America a year prior to Pearl Harbor. Reinstein’s early attempts
to refine the formula resulted in African-American super soldiers.
Three hundred of these soldiers were taken from Camp Cathcart and
subjected to potentially fatal experiments at an undisclosed location in
an attempt to re-create the Super Soldier formula, as seen in Truth:
Red, White & Black. Only five subjects survived the original trials.
In the name of secrecy, US soldiers executed the camp’s commander and
hundreds of black soldiers left behind at Camp Cathcart. The government
told the families of the three hundred subjects that their loved ones
had died in battle.
The sole survivor of his test group, Bradley
stole a spare costume intended for Captain America before he engaged in a
suicide mission to destroy the Super-Soldier efforts of the Nazis at
the Schwarzebitte concentration camp. There, he was also able to
assassinate Koch. The mission ended when the Germans captured Bradley.
Nazi interest in the American supersoldier was high; he was even brought
before the Führer himself. Bradley was later rescued, only to be
court-martialed and imprisoned at Leavenworth around 1943. In 1960,
Bradley was pardoned by President Eisenhower and released.
Considered
to be the “Black” Captain America, Isaiah Bradley became an underground
legend among much of the African-American community in the Marvel
Universe. A number of the most noted Africans and African-Americans of
the twentieth century’s last four decades visited Bradley as a sign of
respect and, in many cases, hero worship. His visitors have included
Malcolm X, Richard Pryor, Muhammad Ali, Angela Davis, Alex Haley, Nelson
Mandela, and Colin Powell (as evidenced in Truth: Red, White &
Black #7). Outside the Black community, however, he remains largely
unknown. When he arrived as a special guest to the wedding of Storm and
the Black Panther, Luke Cage was awestruck while Wolverine was totally
unaware of the man’s identity or importance. 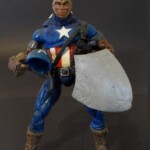 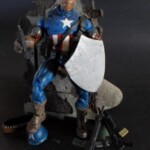 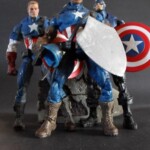