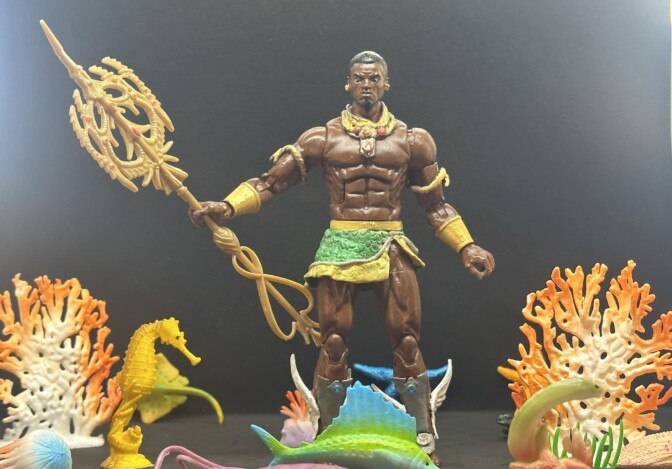 Powers:  He has superhuman stamina, durability,
agility and speed, but his powers slowly decrease as he spends time out
of the water. He can survive indefinitely in water or on land, and is
able to withstand all pressure and cold in the sea. He has the
durability to withstand the pressure of the depths of the ocean, extreme
heat temperatures, and sonic attacks. He can swim at torpedo-like
speeds and has an extended lifespan. His skin is very resistant to
physical damage though he’s not invulnerable but can resist bullet fire
and is fireproof. Namor also has wings on his ankles which allow flight
at superhuman speeds and maneuverability. Lastly he is one of the
strongest earth based heroes who can lift well in excess of 100 tons
putting him in the same strength class as Hulk, Superman, Icon, Blue Marvel and Thor. His strength and power increases when submerged in water.

Born in a world where his father was African American as opposed to
Caucasian he has the same past as 616 Namor except he became king of
Atlantis at an earlier stage. He rescued Susan Storm from certain death
after her spaceship had been bombarded by cosmic rays and battered by
asteroids and all her crew mates were killed. This event marked the
death of 3 billion people as the asteroids smashed the south Americas
into islands, destroyed the Caribbean, destroyed Japan and destroyed
England. The other meteors that didn’t make land fall created a series
of Tsunami’s which further remade the world. Africa was left the only
real super power which was divided by Storm and the Villainous Black Panther.
The rest of earth and the expanded sea became the realm of Namor and
Atlantis. Susan and Namor eventually grew to love each other wed,
producing many children.He also became friends with Remy Lebeau.Gambit
of the X-men, who eventually died in battle, he would name his first son
after him. The atlantean rebels allied with the Black Panther and her
armies in hopes of dethroning Namor. This is how he met the reality
hopping Exiles whom his son eventually joined. In his son’s absence he
was killed by the evil Black Panther. His son Remy would succeed him as king. 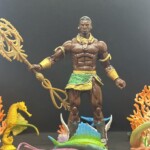 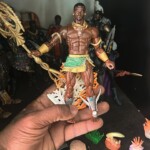