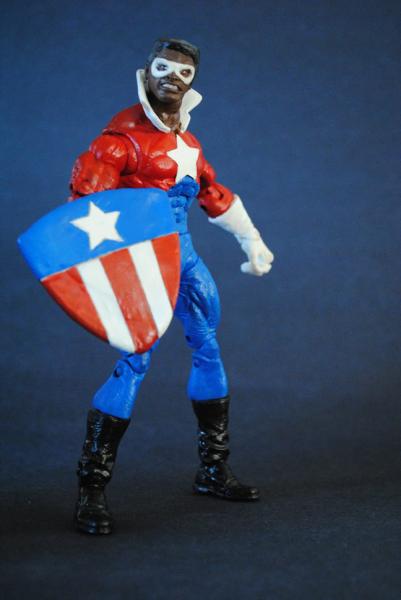 Here’s is the second on my “Garrision” line… Battlestar..Background:Lemar Hoskins was once a wrestler who had been giving superhuman strength through a treatment administered by the Power Broker. Hoskins became one of the Bold Urban Commandos, or “Buckies,” who wore variations on Captain America’s costume and claimed to be supporters of Captain America’s rival, John Walker, the Super-Patriot. The Buckies pretended to attack the Super-Patriot at a Central Park rally as a public relations stunt. The Buckies also conducted a campaign of intimidation and even physical attacks against foreigners as part of an anti-terrorist campaign. (No evidence has been recorded that the Buckies’ targets were in fact guilty of terrorist activity.)The federal Commission on Superhuman Activities eventually selected Walker to replace Steve Rogers in the role of Captain America. Rogers had quit the role rather than serve directly under government supervision. The new Captain America, Walker, agreed to take orders from the Commission. Walker asked to be allowed to continue to work with the Buckies, but the Commission approved only of Hoskins. In the 1940s the original Captain America had a young partner known as Bucky. Thus, Hoskins became the fourth person to take the costumed identity of Bucky.Hoskins and Walker underwent a rigorous program of training under the supervision of Commission member Dr. Valerie Cooper.Another black man convinced Hoskins that using the identity of Bucky was demeaning inasmuch as first, the original Bucky was a boy subordinate to the original Captain America, and second, “buck” was an offensive term applied to blacks in some parts of the country. As a result, Hoskins took on the new costumed identity of Battlestar.Following the return of Steve Rogers as Captain America, Battlestar left federal employment to return to his native Chicago.Battlestar is currentlythe team leader of the Vermont Initiative team the Garrison.The Garrison has the distinction of being the only Fifty State Initiative team to be made up of all Black members. Although Vermont is an odd choice, the characters were all allied in the old Silver Sable series and make sense together, and diversity is always a good thing.Recipe:Head: sculpted ML Luke CageToro/Legs: ML SentryArms/hands: ML Capt. BritainShield: truly the hardest part of this whole custom. And the funniest. First I used an old WWII Marvel Select Cap shield as the base. I dremeled off the top to get the right shape. After that I applied a thin layer of scruptie to give myself a flat clean surface to wok with. After that, I drew the design on the shield and cut the grooves in the shield so it would look more like an molded shield rather than just having the design painted on.As always comments are always welcome.. 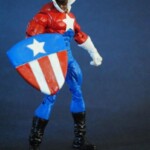 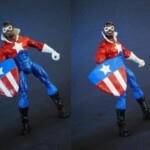 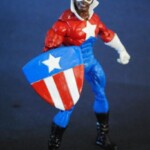 This custom is currently listed on Ebay Now!

This custom is currently listed on Esty Now!